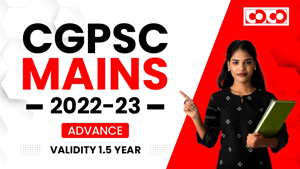 For the preparation of these exams, the test series are critical. Students mainly used to join coaching centers for the preparation, some students used to do self-study, and online platforms are also mostly preferable mainly in 2020 due to pandemic.

But the most confusing thing is, which is the best test series for clearing the exam.

Every year roughly 2 lakhs candidates appear for the CGPSC Prelims examination out of which CGPSC Selects Around 1500 Candidates For Mains Examination. The major key difference for the Candidates who clear the Prelims exam is the extensive revision and practicing from multiple mock test Series

When it comes to solving Mock tests there is traditional practice of taking prints of the test series and solving tests.

Instead of joining the Prelims test series many students solve mock tests by taking printouts of the test series from the market but by this way, students will not able to maintain a schedule in a disciplined manner so this way students are not able to use tests series in a fruitful manner.

So here we are mentioning about the best test series for CGPSC 2022:

Tuteja Tutorials is one of the successful brands in coaching industries.  its test series are considered as one of the best test series for exam preparation with good mentorship.

They provide quality lectures on GS, CSAT and current affairs for Prelims and Mains conducted by the best faculties.. It has the best compilation of Hindi material and test series.

Tuteja Academy is run by ex-civil servants themselves making it a trustable and accountable option to rely upon.

Like this, this coaching is renowned to produce results every year.

It is the only institute charging the same fees for both online and offline courses and live classes in the online setup as well.

Competition Community is one of the fastest-growing online platforms which provides many courses and is considered as one of the top test series for CGPSC preparation in online mode and offline mode. CC 2022 is the new course started by them in which test series are available in both Hindi & English.

Delhi IAS Academy is situated in Bilaspur and is consistent with glorious results. Also, they conduct classes on a Bilingual basis. Their course includes class tests and test series as well.

Delhi IAS is considered as one of the best coaching for CGPSC in Bilaspur region. Every year they come up with several courses.

Recently, they are providing an integrated program in which MAINS & Prelims both test series are mentioned. The classes are in both online and offline mode.

Patel Tutorials has its branches all over Chhattisgarh. It is neither a hardcore Hindi Medium institute nor an English Medium one. Patel Academy teaches in Bilingual fashion in all branches.

It is considered the top CGPSC Coaching Institute in Chhattisgarh. They have 8 chains all over Chhattisgarh. Patel Tutorials provides quality guidance and education to the CGPSC aspirants, with in-class education they also provide online sessions for their students. Retired IAS, IFS, and IPS professionals conduct lectures and share their real-time firsthand experiences with the students. The Academy also conducts special sessions on current affairs.

Udaan IAS is situated in Raipur, Durg, Rajnandgaon and Jagdalpur. They also have a reputed name in the coaching industry teaching in Bilingual form. Also, They are affordable yet respected in comparison to other coaching classes.

In this coaching, test series is not included in courses. Sadly, you have to purchase the test series separately. Luckily, you can also buy just test series here. It is arguably one of the best coaching institutes in Durg-Bhilai, Rajnandgaon and Jagdalpur.