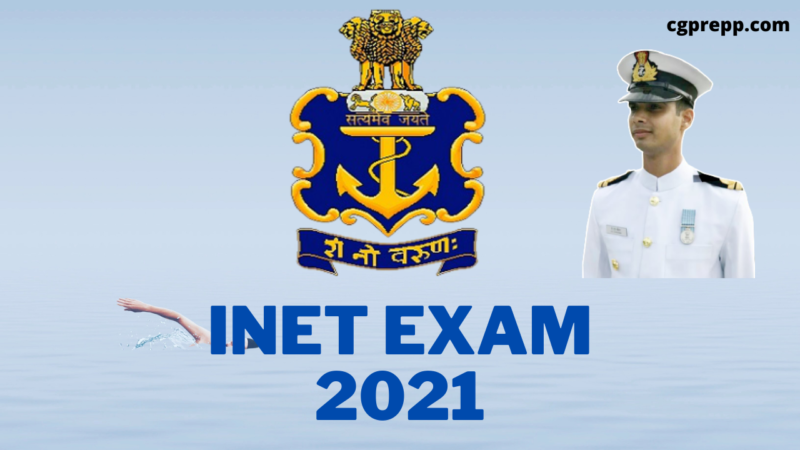 This Indian Navy can be considered one of the most prestigious naval forces in the world. Tell me that this Indian Navy works to protect our country above, below, and below the sea surface.

This INET exam provides a golden opportunity for the wards of defense personnel and other general candidates who are looking for an opportunity to serve their country. Interested candidates must check eligibility criteria, application form, exam date, and other important information given below.

Know about this INET exam: INET stands for Indian Naval Entrance Examination. This INET is a national-level entrance examination conducted for the selection of staff for the Indian Navy.

It is operated by the Indian Naval Academy. This INET exam is similar to AFCAT which is conducted to recruit Indian Air Force officers. But the only difference is that the INET examination is conducted for the selection of personnel for the Indian Navy.

It is for the Short Service Commission (SSC) officer posts by the Indian Navy. Applications are invited to the Executive, Educational, and Technical branches through the Indian Navy Entrance Examination. In this INET, many vacancies have been made available for various posts.

This exam is released only for unmarried male and female candidates. This exam will be conducted in online mode (computer-based). And it also has many objective-type based questions. This evaluation scheme incorporates negative marking.

This INET is conducted with two sessions each year, which are held once in January and once in June. Due to this COVID-19 pandemic, the examination date of INET 2021 has not been announced yet.

As soon as the information about the exam date is received through the official website of INET, then you will reach you through this article.

This INET 2021 June session notification has been delayed. This Indian Naval Academy has not launched any official notification regarding the delay in notification on the official website. Admit card and examination date will also be announced on the release of the Iah-wise notification.

For this INET exam, the basic eligibility criteria include education qualification and age limit. All candidates apply for only one job based on their educational background for which they are eligible. Detailed educational norms and age limits can also be read and viewed below.

This INET Exam 2021 Admit Card will be released temporarily 1 week before the commencement of the examination. You will be able to download this admit card through the official website.

In which the hall ticket contains the date, time, and place of the allotted examination centers. It should be noted by the candidates present that without the admit card, they do not get permission to sit for the INET Exam 2021. Know more about this INET 2021 Admit Card.

Details in the INET 2021 Admit Card

After downloading this INET 2021 Admit Card, candidates are required to carefully check all the details of the option given below. If there is any malfunction in the admit card then the conduct can raise concern for the authority.

It is announced that the final result for INET and SSB interview is cumulative weighting for both simultaneously. The INET result for the January session is expected to be announced on March 30, 2021.

It will be announced soon after the INET 2021 result exam for the June session. All the candidates who have to pass medical, they are invited for training according to the All India Merit and according to the availability of vacancies for the opted course.

All the candidates should follow the step-by-step below to easily check the INET 2021 results.

Step 1: First of all, visit the official website of the Indian Navy.
Step 2: Now, after the home page arrives, click on the login option.
Step 3: Login using these credentials, submit the captcha, and also click on the “Login” option.
Step 4: The candidate has to click on the result option, and you will see the merit list.
Step 5: Download this merit list and keep it safe for your future purposes.

As for the syllabus of this exam, it is very important to know about the overall structure and exam pattern of the INET 2021 exam. All the candidates should check the exam pattern given below.

This syllabus of the INET exam helps you to find out what is going to be asked in the exam. That is, the pattern of questions also changes on an annual basis, but the core syllabus is the same.

If in any case, if the syllabus of the INET exam changes, it is reported here. This INET 2021 question paper is based on the topics covered with the following topics:

The full detailed syllabus for the INET 2020-21 exam are given below:

The Indian Navy has declared a detailed list of documents to be uploaded. All the doc must be in JPG/FITT format. The list of the doc is as follows :

It is conducted in the following examination centers INET 2021. All the candidates have to select the examination city at the time of filling the INET 2021 application form.

The selection procedure for the Indian Navy is as follows:

The Candidates who have successfully filled the application will have to take the INET exam. The mode of communication used between this exam authority and the candidates will be in online mode, which means that all candidates will receive notifications about the exam through email or phone numbers.

All the candidates have been shortlisted in Bangalore / Bhopal / Coimbatore / Visakhapatnam / Kolkata on 20 April 2020 for Bangalore (for Pilot and Observer candidates only) and other branches/entries.

This final merit list is released by the Indian Navy based on the combined marks of INET and SSB. Those candidates who are declared medically fit, are appointed for training based on the availability of vacancies in the cadre/branch as per the All India Merit.

All the selected candidates are to be nominated as officers on the post of Deputy Lieutenant. Candidates of this Merchant Navy who have a Government of India, Shipping and Transport Certificate of Competition as either a second Mate, Mate or Master as Acting Lieutenant.

After these regulations, the rest and guidelines will be provided with clarity about you before appearing for the INET exam.

All the candidates recommended by this SSB will have to undergo medical as per the Navy rules. No exemption is provided to any candidate on medical grounds.

Relaxation in Height and Weight

The Government provides height relaxation by the Indian Navy to the occupants of certain specific states. You can get information about it through the official website

These selected candidates receive basic insurance cover up to INR 1 Crore and this deployed officer is given a gratuity as per rules in the Navy.

When all the candidates are in training, they are given cards according to the training policies. After their training after the commission is given, then the officers have eligibility for annual and contingency leaves as per the existing rules.

All vacancies are declared with official notification. However, a detailed vacancy list of the previous year is as follows:

The salary of an Indian Navy officer depends on various factors like designation and level. And these are also the starting salaries of various posts:

Some of the perks of the officers:

Depending on the position and job role of an officer, they receive some of these allowances: More about this source textSource text required for additional translation information

In order to be eligible for this SSB round, candidates have to get minimum marks. These qualified candidates are called for SSB through email and their registered mobile number.

The cutoff for this INET is merit in nature for all classes. However, the total marks obtained must also be more than the specified cutoff marks.